The Pathfinder™ ACL System consists of a reusable surgical instrument – the Pathfinder ACL Guide – and a flexible Pathfinder Guide Pin with sheath. Together, they provide the surgeon with a unique ability to achieve anatomic femoral tunnel placement with minimal complexity. The system can accommodate any tibial tunnel aperture or orientation, is equally facile with soft tissue or BTB grafts, and is compatible with all commercially available reamers.

The HTT represents a minor modification of the conventional Transtibial Technique (TT). As with TT, the femoral guide wire is inserted through the tibial tunnel to drill the femoral tunnel.

The primary difference with HTT involves both the Pathfinder ACL Guide, the flexible nature of the Pathfinder Guide Pin and the sheath on the Guide Pin. The Guide is capable of directing the transtibial guide wire* without being constrained by the tibial tunnel. This is achieved via the instrument’s open-slot configuration which allows it to capture and direct the flexible transtibial wire to the femoral insertion from the medial portal. The sheath on the Guide Pin acts as a bushing to mate closely with the Guide and to control drilling. [* the terms "guide wire" and "guide pin" are used interchangeably.]

The absence of tibial tunnel constraint with this approach allows the transtibial guide wire to be consistently positioned in an anatomic position on the lateral wall, something a conventional TT cannot consistently accomplish. Because HTT maintains a transtibial path for drilling and reaming, however, the beneficial aspects of TT are still preserved:

The HTT is a major simplification of the AM Portal Technique.

While both methods can place the femoral guide wire at the center of the native ACL footprint, the AM Portal approach requires drilling and reaming to be performed through the medial portal. This requirement increases technical difficulty as it requires hyperflexion of the knee – limiting visualization and requiring an extra shuttling step for graft passage – and puts the articular cartilage at risk of injury as the reamer passes in front of the medial femoral condyle.

Further, because the reamer approaches the lateral wall less obliquely with AM, tunnel apertures are more circular than the native femoral insertion.

Finally, AM portal femoral tunnels tend to be much shorter, more angulated and with a greater risk of posterior wall blowout.

Because the HTT allows drilling and reaming to stay along a transtibial path, these drawbacks are avoided: 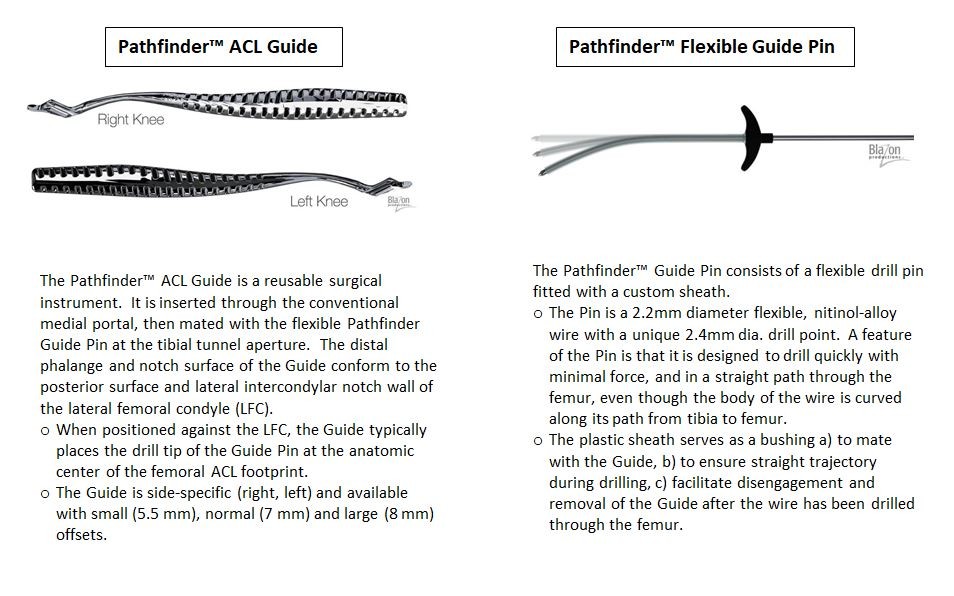 Overview of the Pathfinder HTT procedure

Throughout the procedure the knee remains at 90⁰.